Visiting Sugarloaf Mountain (Pão de Açúcar in Portuguese) is a must do while you are in Rio de Janeiro. This is one of the most visited destinations in Brazil, but there’s a good reason why – the trip to the peak and the views from there are breath-taking. Aside from that in 2012, the Sugarloaf Mountain and the Urca Hill were announced as a part of the world heritage of UNESCO.

Sugarloaf Mountain is a peak, situated in Rio de Janeiro in the mouth of the Guanabara Bay. It is located in a quiet and calm neighborhood, called Urca and it’s in immediate proximity to a smaller peak, known as Urca Hill (Morro da Urca), which you should reach before continuing the path to the Sugarloaf.

How to reach the hill

Thanks to its popularity, the Sugarloaf Mountain has been visited by a large number of tourists each year. It is considered that the foundations were laid in the distant 1912 year when for the first time in Brazil the cabin lift has been put in exploitation. The first cabins have been made with a wooden cover and they have been used for 60 years. The lift has been used also for filming a part of famous film series for James Bond in the movie Moonranker from 1979. Initially, we stopped at the Morro da Urca peak, where there are a couple of restaurants, a café, souvenir shops and a children’s playground.

The views from both hills were stunning. We spent some time, while we enjoyed the beauty around us. Incredible sights towards the Copacabana and Ipanema beach, towards the Corcovado hill, the Guanabara bay and many others. The blue water, the green forests, the yellow sand, the bright sun, the huge granite mountains and even the chaotic concrete jungle were touching all senses.

Aside from the walks to the peak, there is also another way to see Rio de Janeiro from up high.

Without a doubt this attraction is expensive, but it provides an exceptionally beautiful sight from a bird’s view over the city. The helicopter takes off the Sugarloaf platform which is located on Urca Hill and it can be booked online or at the place. The company that offers this service is Helisight. Prices start from R$ 350 (6-7 minutes) to R$ 2045 (60 minutes). 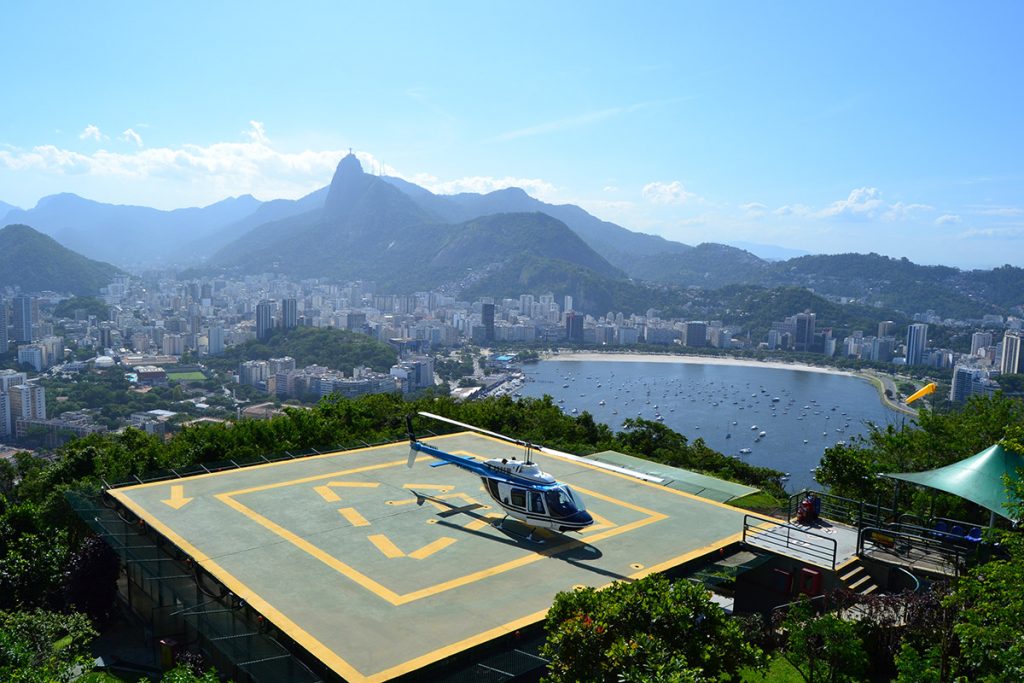 Sugarloaf Mountain not only offers excellent views from the top, but there are also facilities for rock climbing. This is one of the most preferred places for climbing in the region and there are many different routes, but some of them are with a high difficulty rating.

The best time to visit the Sugarloaf Mountain is early in the morning. Avoid the weekends and the national holidays because of the crowds. Aside from that, avoid the cloudy days so that you do not become disappointed by the view. If you are visiting during the summer, do not forget the sunscreen and lots of water because the temperatures are quite high. The most pleasant and photogenic time is during the time of the sunset on a clear, sunny day.