The next destination of our trip was the city of Sapa. We chose to travel by night bus from Hanoi. The interior of the bus looked luxurious, and it had beds. On the downside, I noted that the beds were really short and were made to suit Asians. The trip lasted about 6-7 hours and we arrived in Sapa early in the morning.

From the moment we got off the bus there was a large crowd of women, dressed in traditional local clothes, offering their services for one of the hikes in the area. Most people stay at least two days but we only had one day and we had to choose the optimal and most doable option for a one day hike. We agreed with a Hmong woman for her to be our guide and we set off.

Sapa is a beautiful mountain village in northern Vietnam along the border with China. Located 1500 metres above sea level, the city is famous for its beautiful and picturesque views of rice terraces and with its rich cultural diversity. Many ethnic minorities live in and around Sapa. The majority are the Hmong – 52%, followed by the Dao with about 25%.

This is one of the biggest ethnic minorities in Vietnam – over one million people. They are mainly concentrated in the mountain northern part of the country and they usually live high above sea level. They can be easily recognized by the way they dress and their traditions. The Black Hmongs are easily recognized by their traditional indigo blue dress.

A large number of the elder women sew traditional clothing and blankets and make souvenirs which are sold to tourists. The amazing thing is the majority speak English remarkably well. The children of these ethnic minorities often start selling small souvenirs to tourists to help their families. Girls and boys marry early – when they are about 15 – 18 years old.

The plan was to visit Silver falls and then a 6 hour hike to a few mountain villages, including free lunch and dinner, and a trip back to Sapa, where we needed to get the bus to Hanoi from. This is a good place to mention the difference between hiking and trekking, which I recently discovered myself. The main difference is the intensity and the duration.

The waterfall is located about three kilometers away from the center of the city and it is easily accessible by scooter. I had big expectations for this place, but to be honest I was disappointed, because it was dry season and the waters were not quite as lush, and the whole view was not impressive. Of course the view during the rainy season is far different. Entrance fee is 20 000 VND (€ 0.75).

Hiking in the mountains

After the waterfall we went back to the city, where the real hike began. In the next few hours we admired the beautiful nature of northern Vietnam, where the view from the top of the mountain was amazing and breath taking. The panoramic view was fantastic. The beautiful rice terraces revealed themselves and the fog broke here and there under the pressure of the sun’s rays. 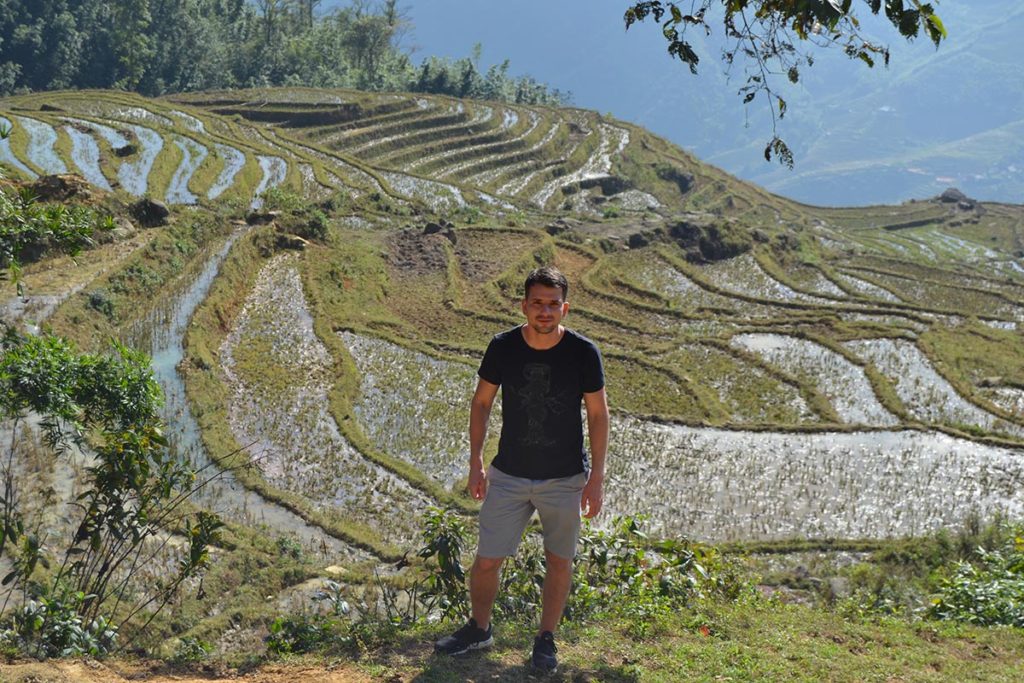 Gradually the heat became unbearable and the worst thing was that there was nowhere to hide from the burning hot sun’s rays. After a 6 hour hike we reached even one of the farthest villages. We were greeted by a group of children, which were excited to see the tourists and naturally tried to sell bracelets for a small amount of money.

My first impression of the village was that it felt like time had stopped for many years. Younger children were on the field and were running, laughing and playing free. You could fill the happiness of their shining smiles. Others were swimming naked in the near stream or in improvised bathing troughs and were splashing around in the water. In this moment I realized they are all so far away from expensive toys, mobile phones or computer games. Their childhood was somehow more real, more primitive. We reached the house of our guide. It looked like a shack made out of wood, and the only things I saw inside were a big bed and a wardrobe. There was no television set, no computer, not even a refrigerator…we had lunch there, and we talked about the difficult life in the villages, where some places do not even have electricity. During lunch I learned how Vietnamese say Cheers. They usually say: “Một, hai, ba, Dzô!” (it‘s pronounced “Mot, hai, ba, yoo”), which in English means “1,2,3 Cheers!”, but it’s important to know that there are many dialects, some ethnic groups even speak a different language, for example in this village “Chuka” is also used for Cheers.

Returning from the village to the city was significantly easier. Our guide’s husband was kind enough to take us by motorcycle. We went back to the city tired, but with wide smiles on our faces and we sat down at a hotel to wait for our bus.

The hike in the mountains of Sapa was incredible. This is one of the best walking tours and I highly recommend it to anyone visiting the area.