Nami Island – one of the most beautiful destinations near Seoul

Nami Island or “Namiseom” is settled 63 kilometers away from Seoul in the middle of the river Han. It takes up the area of approximately 460 000 square meters. It was artificially made after the Cheongpyeong damn was built and the flooding that followed.

Nami Island has been known well as the scene of a popular Korean drama: Winter Sonata. The film reaped a phenomenal success in many Asian countries. After this movie, the island turned into a major touristic destination thanks to its proximity with the capital Seoul. It prides itself with a beautiful and calm nature during all seasons. In the springtime, everything has been covered with flowers; during the summer, you can cool down inside the shady forest; the fallen leaves form a beautiful multicolored carpet in the autumn; and in the winter, a white snowy cover embraces the island.

How to get there:

You can get from Seoul to the island in a couple of ways: by taxi, by bus or metro. I took the metro, using the following route:

Once you arrive at the last metro station Gapyeong Station, there are three ways to get to the pier Gapyeong Wharf, in order to catch the ferry: by foot, by bus or by taxi. The quickest way possible is by taxi and the price is ₩ 4000.

After you reach the harbor, you should buy a ticket/visa. The regular price is ₩10 000, but for foreigners, who bring passports with them, the price is ₩ 8000. The ticket includes a round trip with a ferry and an entrance to the island. The ferry has the following schedule:

What can be seen:

As one of the most unique places in South Korea, the Nami Island even announced its “cultural independence” from the country and re-named itself as the Naminara Republic. This imaginary “country” has even come up with its own passport, as well as Border Police.

The island is incredibly picturesque in every single season of the year which makes it a preferred spot to visit when you are in Seoul. The autumn here arrives tinted by bright nuances at the end of October. I was there exactly during the time of the “Golden season” and many tourists had decided to make a trip to the island. This is why I recommend going there early in the morning in order to avoid the crowds. For the visitors of all ages, different cultural facilities are provided and entertainment activities. 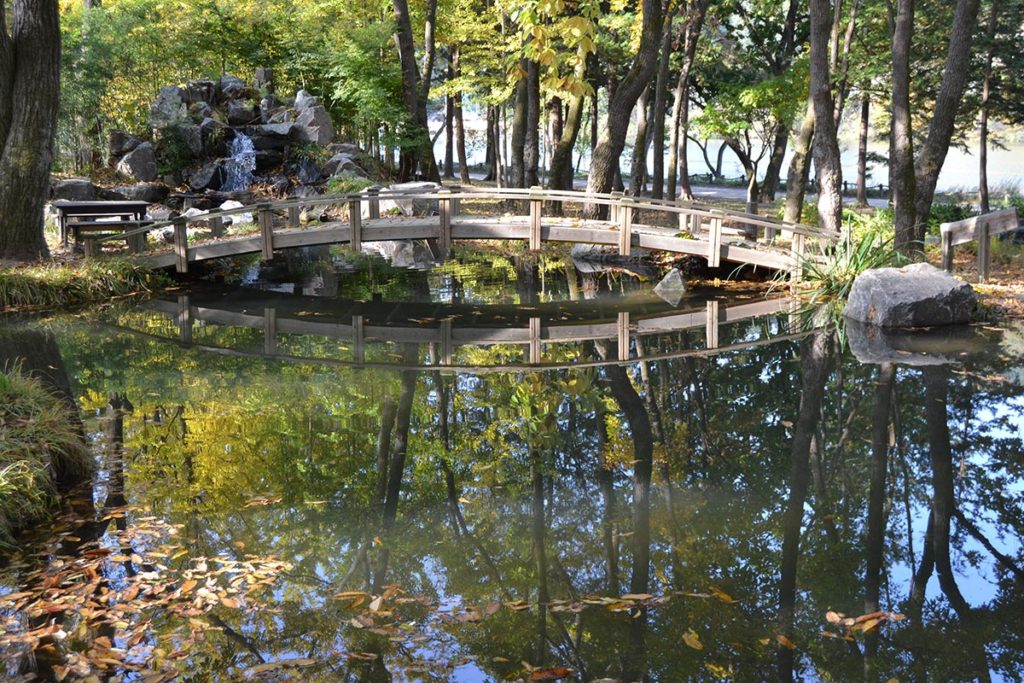 I began my walk along the river on a beautiful forest path. A little while after, I took the Maple Lane, which crosses another path, known as The Maple Lane of True Love. Besides beautiful paths there are also many gardens where you can spend the whole day. You can find a quiet place and to make a picnic or simply to enjoy the silence. Very close to Dodamsambong Garden is found also the statue of one of the main characters from the drama “Winter Sonata”.

There are also other interesting statues like this one:

This interesting little garden was created by recycled materials from what was once a monkey cage. In the Southeast part of the island you will find a beautiful and romantic path – Ginkgo Tree Lane. The path is 80m long and is one of the most photographed places in the entire South Korea. One of the most wonderful places on the island is the path with the gigantic metasequoias. The sequoia is considered to be the tallest tree in the world, reaching up to 115 m height. The majestic trees are located on both sides of the Metasequoia Road. By its elegance and majestic appearance, this is one of the most popular objects on the Nami Island. The path is also a part of many romantic scenes in the “Winter Sonata”. On the Nami Island, the animals are loved by all visitors. These ostriches, for example, often go outside of the barrages and walk around freely. There are also many roes, squirrels, rabbits, ducks, geese and many types of birds. The Nami Island is beautiful. This is the ideal place for everyone who wants to be far away from the fast-paced daily routine of the city and enjoys the beautiful nature. Words do not suffice to describe the beauty and the calm nature of this island.

Read more: Climbing the Highest Mountain Top in the Bukhansan Mountain in Seoul