The magic of Vienna

Without a doubt Vienna is one of the most beautiful cities in Europe. Thanks to its central location in Europe, it’s a very popular destination for visitors from all over the world. The capital of Austria is a city that I recommend to visit at least once, because there is something special here for everyone.

With its rich history, beautiful architectural landmarks and countless parks and places to rest, Vienna is the perfect destination for a solo trip, romantic excursion or family holiday. It’s blessed with numerous architectural treasures and amazing constructions. Taking a walk in the historical center of Vienna, which is part of the UNESCO world heritage, is like travelling in time – from the middle ages through Baroque to the Gründerzeit.

In the next few rows I will introduce to you the places you shouldn’t miss when you are in this charming city.

Visiting Schönbrunn Palace, which is part of the UNESCO cultural heritage, is a must. It was designed in Baroque style by architect Johann Bernhard Fischer von Erlach for emperor Leopold I, who commissioned an imperial hunting lodge for his son – Prince Joseph. It was converted during the XVІІ century and completed during empress Maria Theresia’s reign. During her time the palace bloomed, resembling like a small city with numerous servants, gardeners and guards, which took care of the imperial family.

There are amazing gardens, parks, forests and pavilions on palace grounds that attract the eye. All of them are symmetrically aligned up to the smallest detail. In fact Schönbrunn means “beautiful spring” and exactly during this time, as well as during the summer, the gardens are the most beautiful. 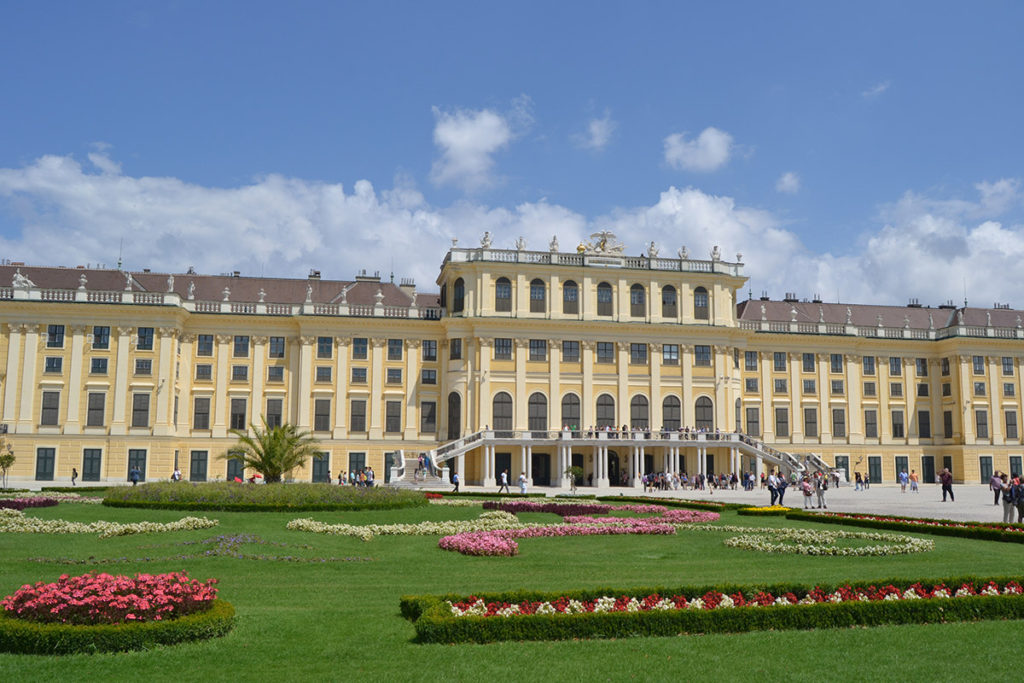 A steep curving trail leads to the Gloriette for a truly unbelievable view. Built in 1775 as the last building, built in the garden, it was used as a dining room and festive hall, as well as a breakfast hall for Emperor Franz Joseph I. Today there is a café, and on the rooftop there is a platform for observation with a view of Vienna. UNESCO has included the palace as well as the gardens in the list of the world cultural heritage as an exquisite baroque ensemble, an example for intertwining with art. The palace and the gardens display the taste, interests and aspiration of the Habsburgs. The Belvedere palace is one of the most beautiful not only in Vienna, but in the whole of Austria. The complex is built in Baroque style and consists of two buildings – Upper and Lower Belvedere. Lower Belvedere is the older of the two. Nowadays in the upper building you can visit the largest collection of Gustav Klimt paintings in the world. There is an amazing park located between them in French style with many statues and water springs. Located on a terraced slope, the grounds of Belvedere are absolutely amazing and a great place for a walk in good weather. Hofburg palace is a former principal imperial palace in Vienna’s center. The construction of this massive building started in the XIII century. The Habsburg dynasty used it as a residence until 1918. Now it is formal residence and today it serves as the official residence and workplace of the President of Austria. The historical heart of the complex is the old emperor’s palace – Alte Burg. Over time the palace has been expanded numerous times with different buildings. As a result, Hofburg architecture varies from Gothic to Baroque. This massive Gothic cathedral with incredible architecture is located at the heart of Vienna, marking the geographical and spiritual center of the capital. Thanks to its central location in the old part, the panoramic view from the rooftop is extraordinary. The cathedral is one of Vienna’s biggest landmarks and is easily accessible using the metro to Stephansplatz (Vienna U-Bahn) metrostation. Hundertwasserhaus is a project by the eccentric Austrian artist and architect Friedensreich Hundertwasser. He is considered a rebel in the field, and his vision is free architecture for all with no standards and specifications. If you admire Gaudi’s style, you should not miss this monument. The apartment house is an extravaganza of colors, mosaics and non-conforming design. The Hundertwasser museum, a bit to the side, houses the author’s work. The place is colorful, attractive and combines art, ecology and town planning. Donauturm tower (Danube Tower) is located in the middle of a park, a little bit further away from the heart of Vienna. During the sixties this place was a dumping ground which was converted into a true paradise for lovers of the great outdoors. The tower offers a wonderful panoramic view and is the best way to get a 360 degree view of Vienna, while enjoying the tasty food. There is a restaurant located up there, which turns very slowly giving you the change to enjoy a different view. Today Vienna has plenty of beautiful historical landmarks remaining from its glorious past, intertwined with luxurious neighborhoods, cultural spots and contemporary architecture. I am certain it’s a place which would appeal even to the most pretentious of tourists. If you haven’t been there yet, you should definitely go!

*Header photo: the building of the Austrian parliament.